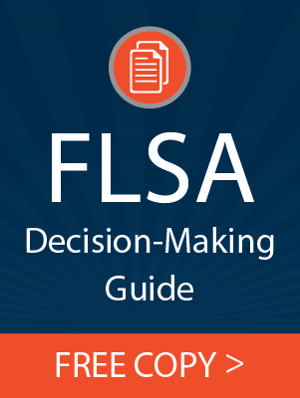 The Department of Labor announced late Thursday, March 7, that it has issued its long-awaited Notice of Proposed Rulemaking (NPRM) revising the agency’s white-collar exemption rules (29 CFR 541), raising the salary threshold to qualify as exempt from overtime. We recap the overview provided by Wolters Kluwer in the EmploymentLawdaily.com article

Steep increase in salary threshold. The current proposal would update the salary threshold from $455 per week ($23,660 annually) to $679 per week (equivalent to $35,308 per year). Above this salary level, eligibility for overtime varies based on job duties.

The DOL estimates that 1.1 million currently exempt employees would become eligible for overtime if this increase is adopted.  These are workers who earn at least $455 per week, but less than the proposed  $679 per week.  (See our FLSA Decision-Making guide to identify and decide what to do with your workers in this salary band).

"Highly compensated" hike. The new proposal increases the total annual compensation requirement for "highly compensated employees" (HCE) from the currently enforced level of $100,000 to $147,414 per year. Above this salary floor, employees are automatically exempt from overtime.

The DOL estimates that an additional 201,100 workers who earn at least $100,000 but less than $147,414 per year, and who meet the minimal HCE duties test but not the standard duties test, would become eligible for overtime under the rule change.

Bonuses will count. "In an attempt to align the regulations better with modern pay practices," according to the NPRM, employers would be allowed to use nondiscretionary bonuses (such as nondiscretionary incentive bonuses tied to productivity and profitability) and incentive payments (including commissions) that are paid annually or more frequently to satisfy up to 10 percent of the standard salary level. (The 10-percent cap appeared in the 2016 final rule as well.) There is no change to the use of bonuses for purposes of establishing the highly compensated employee salary floor, however.

The DOL is inviting comment on whether the proposed 10 percent cap is appropriate, or if a higher or lower cap is preferable.

No changes to duties test. Like the 2016 rule, the DOL’s NPRM proposes no changes to the duties test, but the NPRM emphasizes that determining exempt status by salary alone, "irrespective of employee duties," would stand in tension with the FLSA, which empowers the DOL "to define and delimit employees based on the ‘capacity’ in which they are employed.

Salary is a helpful indicator of the capacity in which an employee is employed, especially among lower-paid employees," the NPRM states. "But it is not ‘capacity’ in and of itself."

"Commenters on the RFI and in-person sessions overwhelmingly agreed that the 2004 levels need to be updated," said Keith Sonderling, Acting Administrator for the Department’s Wage and Hour Division. But this proposal does not call for automatic adjustments to the salary threshold.  The rule does commit to periodic review to update the salary threshold.

Finding better ways to automate time tracking for the employees, for example, to streamline scheduling will lead to better outcomes and minimize compliance risk during this transition.  Contact OnePoint for a demonstration of ur unified HCM solution for your organization.

More DOL information and invitation for comment. The DOL published a fact sheet on its NPRM as well as a dedicated web page on the overtime rule, including FAQs about the proposed revisions. The DOL is seeking comments on the NPRM’s language for periodic review and if the proposed 10 percent cap on bonus income is appropriate.

Register for the OnePoint HCM newsletter* and discover innovative ways to manage your most important resource: your employees.

*To receive the OnePoint HCM eNewsletter delivered to your inbox sign up now.